I’ve probably mentioned that as well as potoroos, pademelons and wallabies we also have resident possums in our garden. The possums use our roof as a shortcut to get from the trees in the front garden to the trees in the back. We often hear them running to and fro after dark.

There is an empty block of land behind us and we think that the possums may live there but they often cross our gazebo roof to reach a large gum tree in the back garden.

The dogs, especially Teddy, love to go down to the “possum tree” after dark and bark at the possums. We sometimes see them ourselves in that tree late at night or occasionally one of the other tall trees that are level with our balcony. It was a while before we realised that the terrible screaming noises that we often hear at night were not Tasmanian Devils (they have an awful shriek) but just possums fighting.

The first time we saw the possum we call Blackie he was just a baby on his mother’s back. They could often be found in the big gum tree at night. The mother, who we call Brownie, was very watchful of her baby as he started to clamber around the tree on his own. They would stay in the tree while we watched quietly but if either of us made a sudden move, they would take off across the gazebo roof.

Blackie is a few months old now and has started coming to the tree by himself. We haven’t seen Brownie lately. The other night when Naomi went outside to get Teddy in, she came back to the living room and called me to come outside quickly. When I came out to the balcony, she pointed out Blackie sitting on the roof just a few feet from us. He didn’t seem particularly worried. Teddy was off barking at the tree and hadn’t noticed him.

I wondered if he would stay long enough for me to get the camera. I had been using it earlier that day so I knew there was a card in it. I wasn’t sure there would be enough light but I decided to try anyway.

Naomi shone the big torch she always takes outside at night onto Blackie. I decided not to use the flash if I could help it. I thought it might startle him and hurt his eyes. I only got these two photos but with a little editing you can see him quite well. Blackie stayed peering down at us for a few minutes and then got up and wandered back across the roof. I suppose he/she is a bit used to us having seen us several times over the past few months.

Naomi says that it looks to her as if Blackie’s fur is becoming browner as he/she gets older. We don’t know what sex Blackie is. Brownie was obviously a female as she had a baby.

The two main types of possums in Tasmania or the Brushtail and Ringtail families. Blackie and Brownie are brushtails. We’ve seen a couple in other colours including one who is a golden colour. These possums are much larger than the Ringtails and have fluffy tails. We’ve seen one who is as big as a cat. The possums are quite naughty as I know it was them who were nibbling at my plants on the balcony last year. However, we think they are cute so rather than try to deter them from coming we’ll just get some protection for any plants we want to grow on the balcony.

By the way Australian possums are not related in any way to the American opossums. 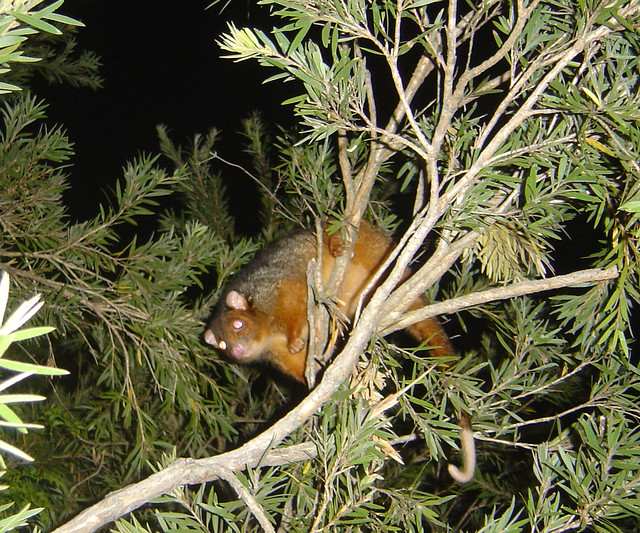