We’ve all had those phone calls from non-profit organisations wanting us to support them either once-off by buying raffle tickets or merchandise or more frequently these days by making an ongoing financial commitment. I don’t like getting them because I feel guilty that I must so often say no. There are so many causes that need our help and they are all worthy, helping children get an education, medical research, animal welfare, the environment. It’s easy to donate if you are well off and it will even be tax-deductible. It’s a lot tougher if you are hard up yourself.

Many people don’t like to deal with charities because they feel that a great deal of their money will end up going to administration and not to the people or animals that need it. That’s not unreasonable because it does happen. I respect and admire the work of the Salvation Army but many people tell me that their Op Shops, and those of other big non-profits, are becoming almost too expensive for people on low incomes to shop in. I suppose it’s inevitable, they run them as businesses, sometimes with paid managers. Their core business is fundraising, not providing affordable goods to low-income earners.

However, there are many ordinary people making a difference to the lives of others, just quietly going about their business and not thinking of any reward. As you know I volunteered at the Op Shop in Geeveston for about three years. The shop was started about eight years ago by Juarne Bird and her sister Rowena to help the local community by having affordable goods for sale and also by providing opportunities for some of the young mums in the area to get some work experience volunteering at the shop. After the first few years, she had to find larger premises and that is how the shop came to be at the local school in an unused classroom. As well as donating to the school the shop supports many other local organisations with donations. All the staff are still volunteers.

Many people in the Huon Valley are what Aussies call “Battlers”. There is not a lot of work and something like the bushfires last summer can be devastating for local businesses. However, there is a strong sense of community and people try to help each other out even if they don’t have a lot themselves.

I want to mention my friend Karen Brown who I worked with at the Op Shop. During the bushfires, the shop was closed for a couple of weeks but Karen was busy. As well as taking in various friends and relatives and assorted pets who had to evacuate she spent hours every day cooking and taking food to the evacuation centre in Huonville where many people were sheltering. She bought a lot of the food with her own money. Nobody asked her to do it. She just did. This was not just for a couple of days, I think it was for about two weeks. 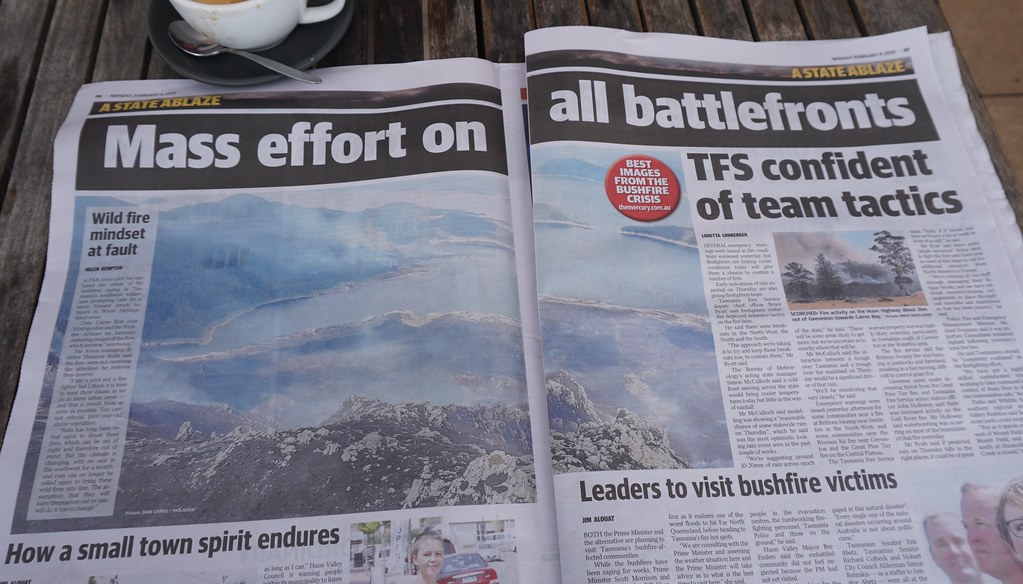 Those of you who use social media may be familiar with “Pay It Forward” sites. Basically, the way they work, with a few variations is that someone donates an item to the site which people can ask for and then the recipient, in turn, donates an item to the site. A local lady called Lyn Duggan decided to start one of these sites on Facebook and by doing this has been able to help out a lot of needy families in the area as people often donate multiple items She ended up having to buy a shipping container to store goods in. As well as sorting and bagging goods to be donated Lyn also cooks meals for families who are doing it tough. This year she has, with help from a few others involved with the site, collected and wrapped hundreds of Christmas presents as well. Apart from donations of goods, from members on the PIF site, Lyn spends a lot of her own money. Again nobody asked her to do it; she saw a need and she set out to do something about it.

I personally think that people like Juarne, Karen and Lyn should get some kind of recognition for what they do in the community so even though I don’t know if any of them will read this I’m putting it out there that these are pretty awesome women.