I wrote this post in the spring of 2014 and rather to my surprise it has become one of my most viewed posts ever. Who knew that so many people were searching for articles about unlucky plants? Certainly not me! Anyway I thought that I would run it again for those of you that are interested in the subject or just like pictures of pretty blossoms.

Our old nectarine trees are blossoming again. I love seeing blossoms on trees. We have some lovely flowering trees in Australia  wattle, bottlebrush and flame trees to mention just a few of the native plants.  I always look forward to the apple blossom which comes and goes so quickly that you could easily miss it even in orchard laden Tassie.  I always think that pink blossoms would look lovely in a vase with daffodils but I never pick any. Why? Superstition.

My mother always used to tell us “Don’t bring blossoms into the house. It’s bad luck.” Well mum thought a lot of things were bad luck but she was mum, we didn’t argue.

Some of her superstitions were:

I don’t know if I really believe all these things myself but from habit I do what mum did – except the one about cats. I’d have another black cat any time.

I wondered about origin of the “no blossoms in the house” myth and googled it just now. I found that it was pretty widespread amongst my mother’s and grandmother’s generations. A lot of superstitions involve particular plants one of the main offenders being hawthorn or as it’s sometimes called in England, may blossom. This has just reminded me that two relatives in mum’s family were called May and Blossom.

Mauve lilac came in for a lot of mentions too and one superstition that I had never heard of was about having red and white flowers in the same vase. Supposedly they signify blood and bandages. I don’t know if mum had heard of that one as I am sure we did that many times when we had red and white roses growing. I also know that mum was not superstitious about honeysuckle because she loved perfumed plants and would often bring it in.

Plant Lore is a website that collects folklore about this sort of thing and it has some interesting information on it.  Most of the responders to their “Unlucky Plants” survey seem to be like me, warned off by older family members with no real explanation given. “Just don’t do it. Because I say so!”

One writer, a former nurse said that she’d been told not to put red and white flowers together on pain of dismissal. Even in the 1960s this seems a remarkably superstitious attitude and a harsh penalty. Although this is an English site I’m sure that there is a lot of folklore about plants from other countries too.

As far as I know it’s not unlucky to post pictures of blossoms on your website so here are a couple more pictures of flowering trees. Will I be cutting some of my pretty blossoms to bring indoors? Probably not. 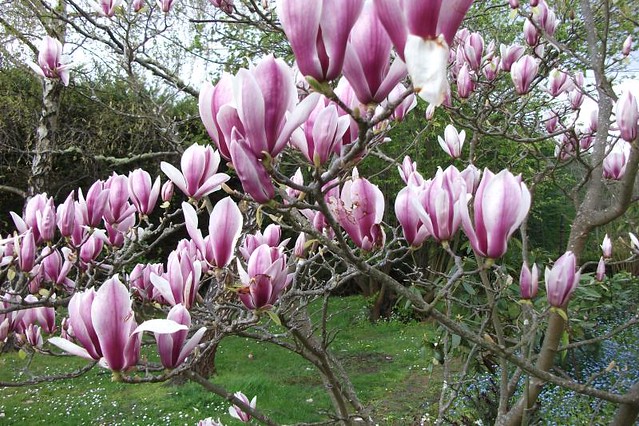