I thought that it would be fun to do some portraits of Barbie over her nearly six decades of dolly life. Non doll people please be aware that there are many styles of Barbie and Barbie friends, different hair and eye colours, different body shapes and sizes, different ethnicity. This is not an attempt to show that. Naomi and I have a doll blog where you are very welcome to visit if you’d like to see more dolls.

Barbie is first released in 1959

Barbie changes her hairstyle several times. During this decade Barbie also got a boyfriend, best friend and little sisters as well as a whole wardrobe of fashions and accessories, a car and a house. 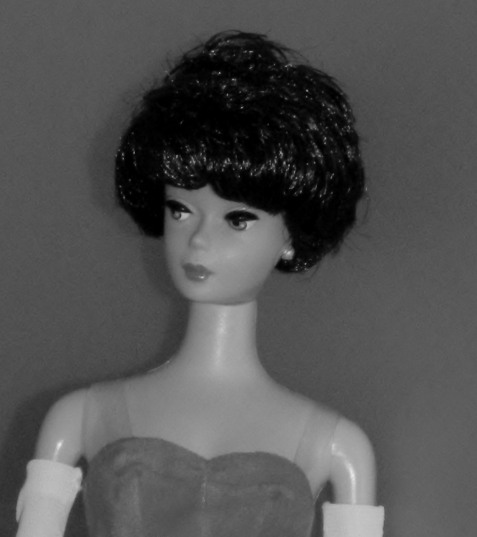 A reproduction Barbie with “Bubblecut” hairstyle.

The Mod Era began in the late 1960s and carried on for nearly a decade. Barbie gets a new body with a twist and turn waist.

The Superstar Era begins. The first Barbie with the “Superstar” face actually appeared in 1977 but this face predominated  the Barbie line in the 80s and 90’s.

Most Barbie’s had the Superstar or new “Mackie” face with closed mouth smile.

Lynne has the Mackie face

Fashion Fever. Barbie gets a new body with a belly button. The Fashion Fever line of dolls appear from 2004 onwards.

Barbie Basics. Starting in 2009 Mattel release a line of higher quality but affordable dolls with a different body sculpt. These were aimed more at collectors than children.

Fashionista era. The current Barbie playline has a diverse range of dolls and Barbie appears much younger than in previous eras.