Tales of a Cat Slave

I’ve had both cats and dogs as pets and while I often see my dogs as four legged people when I look at my cats I see the wild creature in them. They may have chosen to live with us but they are not like us.

Watch a cat stalking a bird or even a bug, they are as focussed on their target as if their lives depended on catching their own food. Even Polly who was not allowed outside the house for the first year or two of her life knows how to stalk prey. It’s all instinct.

Polly goes in for the kill.

Polly is interested in the birds in the apple tree.

Cat’s are not needy. Some cats like to cuddle and some don’t. Some love to hang out with you and some are much more independent. One ginger male we had used to follow us to the railway station when we went to work meowing piteously all the way, often he’d be on or near the platform on the opposite side of the tracks in the afternoon when we came home. I don’t know how he learned that but he did.

Most of our previous cats have liked to sit on laps or sleep on the bed.  Polly has never wanted to sleep in the bedroom let alone on the bed. She has never been a lap cat either, at least not with me. I was very surprised that over the last week or two she has suddenly decided to curl up on my lap in the evenings but that may have as much to do with the fact that I was sitting in the armchair nearest to the heater as love. She’s sleeping on that chair herself right now and I am banished to the couch.

I’m always amused by the saying “Dogs have owners, cats have staff.” They demand their food, usually at a set time.They demand your food and may help themselves from your plate if you don’t stop them. They will wake you up with a pat on the face if they want breakfast, even at 3 am and  they make you get up and let them in or out fifteen times in an evening sometimes coming in one door and going straight out another. If they want to sit on your lap you must accommodate them no matter what you might be doing. Never mind that newspaper you were trying to read or your knitting. Once they are settled you don’t get up out of your chair for fear of disturbing them. I am sure TV remotes were invented by a cat owner.

Then there is Naomi’s cat Tigerwoods who thinks it is amusing to jump into your chair the minute you get out of it. I’ve nearly sat on him more than once. I think that he does that just for a joke but often cats will do something annoying because they want attention and have worked out what action is likely to get it.

Despite their bossy ways I can’t help feeling very privileged when a cat likes me though. 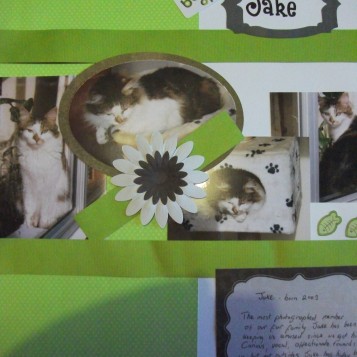 Scrapbook page about our cat Jake. 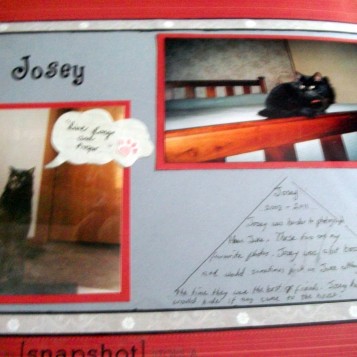 Scrapbook page about our cat Josey.