We bought this bench from a local hardware store to replace the previous one which was getting a little rickety. It used to sit under the kitchen window and David liked to sit there and read when it was sunny. In the first photo it is up on bricks to make it a little easier for him to get out of. We didn’t have much of a garden at the time but if he had a book he was quite happy.

I moved the bench to the bottom of the garden after the path to the shed was built and like to sit there sometimes with a book. It is cool and shady there so I don’t use it as much as the seats under the pergola but it is a good place to watch and listen to the birds in the apple tree. 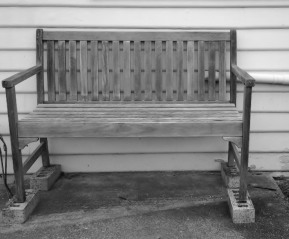 This bench was where David liked to sit. 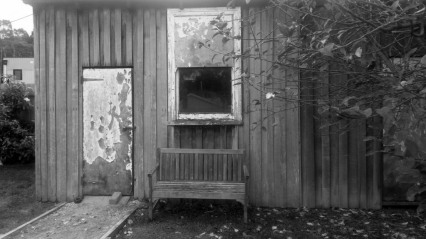 The bench relocated to the bottom of the garden.

This bench is beside the Huon River at Franklin. A lovely place to sit.

The occupant of this bench was an entry in the Scarecrow Competition run in conjunction with the Middleton Fair in 2012.

A bench in a little lane that runs off Collins Street, Hobart.

This is where I wait to catch the bus home from Hobart.

It looks much later but it was  only about 5:40 pm on an autumn evening in 2015 when I took this photo after visiting David in hospital.