If you had an unlimited shopping spree at only one store, which one would you choose? Why? 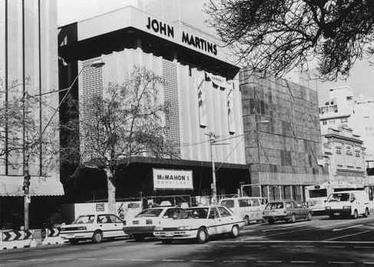 If I had a time machine I would go back several decades to shop at John Martin’s department store in Rundle Street/Mall in Adelaide. If I went back far enough I could buy some wonderful furniture from the thirties, forties and fifties and bring it home to put into our new house as Naomi and I both love the older styles. We could use a nice club lounge and a dining suite with an extension table. I’d also buy bed linen, rugs and lamps to match.

I could pick pretty well any department store from the past to buy these items but “Johnnies” was a South Australian icon which I have written about before. They had a wonderful toy department, I’d buy some dolls while I was back in the sixties too; they were the ones who started the tradition of the Christmas Pageant in Adelaide. John Martins was where mum and I would go to look at dolls together as well as nice china and ornaments and the furniture we would buy one day “When our ship comes in.”

I bought books and records there in the early seventies and David and I bought furnishings for our first home towards the end of that decade. I often had my hair cut there and Naomi and I loved going to the cafeteria, known as “The Buttery” for lunch right up until the store closed down in 1998. You might even say that the loss of John Martin’s was a factor in my desire to leave South Australia.

Back in the real world I think I’m going to say eBay even though it is not a shop as such because if we had unlimited money we could buy those things as antiques.

What is the worst thing you ate recently?

I can’t think of anything really bad that I ate recently.

Not in any particular order:

What did you appreciate or what made you smile this past week?  Feel free to use a quote, a photo, a story, or even a combination.

After several very hot and humid days I really appreciated the cool change when it finally came. What I would appreciate even more is a good downpour of rain.My garden could use it and several of my friends who are on tank water are running out and will have to buy some if it doesn’t rain soon.