Now I had quite a time getting my photos together for this challenge. No way were the fire engines at the Oatlands Fire Station going to come out unless I started a fire myself! This was not really an option so I decided to go to The Tasmanian Transport Museum to take some photos of the fire engines there. It takes about an hour to drive to Glenorchy where the museum is so I filled Wazza up with some fuel and armed with my trusty GE point and shoot off we went. The footy was on but luckily I found a spot for Wazza just outside the museum. The rain looked as if it would hold off so I paid my eight bucks and went inside to get my photos. Now there was plenty to take pictures. There was the restored railway station and plenty or engines as well as buses and trams. My plan was to go and see the fire engines first. When I walked around the corner to their shed it was all locked up and dark inside. “Oh no!” I sighed. ‘Just my rotten luck, the only thing I drove all the way down here to see is not open today. Well I went back to the ticket office and ask the man at the counter about it and he kindly offered to find the keys and open it up for me which he did. He unlocked the door and keyed in the code to take the alarm off. I asked him if it was now safe to go inside and he said yes. I asked him this twice to be sure. I’m thinking “Good now I can take some photos.” No sooner had I gone inside and all the alarms when off. You should have heard how loud they were. I was expecting the cops to show up but it was all ok. Anyway here are my pictures. 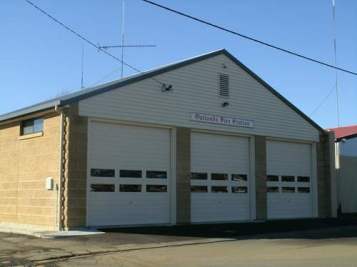