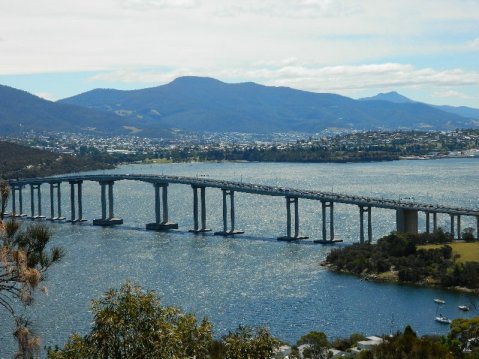 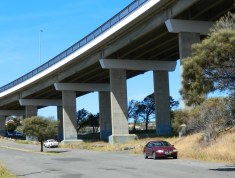 Under the Tasman Bridge 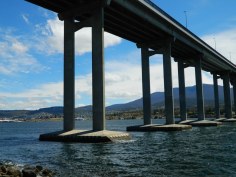 The Tasman Bridge from below. 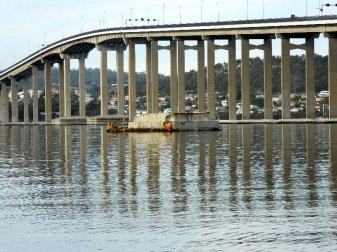 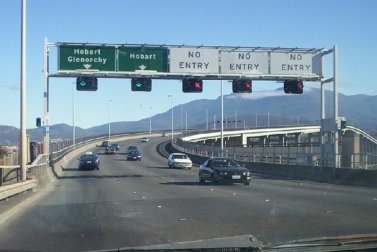 View of the Tasman Bridge from the Domain, Hobart.

The Tasman Bridge spans the Derwent and connects Hobart’s eastern and western shores. It was opened in 1964 and replaced an earlier floating bridge which could no longer cope with the volume of traffic it had to carry.

Australians will remember how on 5 January 1975 the bulk ore carrier “Lake Illawarra” collided with the bridge  taking down two piers and over a hundred metres of roadway.  Twelve people died in the tragedy, five were travelling in the four cars that plunged into the Derwent and seven were crew members on the Lake Illawarra. Others miraculously escaped as their cars teetered on the edge of the gap.

I did not live in Tasmania then but I remember seeing the pictures on the news. It was only when I moved here that I came to understand how much the tragedy affected everyone. Not just the loss of life but the loss of the bridge itself changed the lives of many people.  Most Hobart people over fifty could tell you where they were the night the bridge went down.

At that time the next closest bridge was at Bridgewater approximately 20km away. This meant that residents on the eastern shore of the river were largely cut off from the shops and services in the Hobart CBD on the other side of the river. People I’ve talked to about it told me that in some cases family members were forced to relocate to the other side of the river for work or school. In the short-term the transport problem was partially solved by a hastily arranged ferry service and later by the Bailey Bridge, a temporary structure which was used until the Tasman Bridge was finally reopened in October 1977.

One of the consequences of the disaster was that Hobart got a third bridge over the Derwent which was built between the Bridgewater and Tasman bridges, another was that the development of roads and services on the eastern shore became a priority.

The Lake Illawarra still lies in the deep waters of the Derwent over forty years later. If you look at the photos you will see that the distance between the piers on the eastern side of the bridge is different from those on the western side. This is the area where the disaster occurred.