Douglas Adams first wrote “The Hitchhikers Guide to the Galaxy” for BBC radio in 1978. It became a TV series and several books.

I never heard the radio series but read all the books and loved the television series. I did not bother to watch the more recent movie as I  rarely enjoy remakes.

However, sometimes I wonder if he was influenced indirectly by another British television comedy from a few years earlier. “Dad’s Army” 1968-1977.

British people of a certain age will remember the show which was about a British Home Guard platoon in a fictional seaside town. One of the main recurring characters in the show was Lance-Corporal Jones a WWI veteran who was very excitable. In the event of a mishap Jones would run around waving his arms and yelling “Don’t Panic!” although usually he was the only one who was panicking. 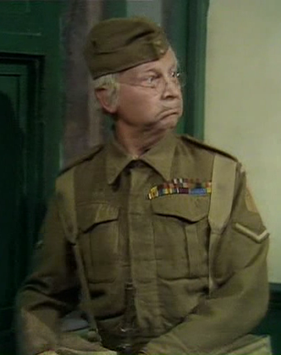 Although the humour in Dad’s Army was very different from Hitchhikers both shows were absurd and amusing and I enjoy watching reruns.

Did Douglas Adams have the phrase “Don’t panic Captain Mainwaring !” running through his head when he was creating the guide which had “Don’t Panic!” inscribed on the cover in large friendly letters? I wonder.