It didn’t seem much like summer on the first day of the Test Match between Australia and South Africa. The sky was overcast and there was no sign that the sun might appear any time soon.  In fact there had been dire predictions that up to four days of the five-day match could be washed out.

Nevertheless I decided to buy a ticket for Day One and hoped that at least part of the day would be dry. I have a 100mm-300mm zoom lens for my camera which I have hardly used and I was looking forward to trying it out.

I was lucky enough to get a ride to Hobart with a friend that morning so I was there in good time and arrived at Blundstone Arena in Bellerive before the gates opened. This is my favourite time to be at the cricket, first thing in the morning on the first day of a Test Match because you can see the two teams warming up before the formalities begin.

It always looks rather chaotic to me. The Australian team are a tangle of arms and legs as they run, skip and do stretches in one part of the ground while the South Africans  seem to he having an enjoyable time kicking a soccer ball around in another. In the middle of the ground the ground staff hover with coverings for the wicket in case it starts to rain and nearby the Channel 9 commentators are doing their pitch report. 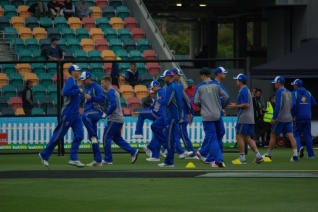 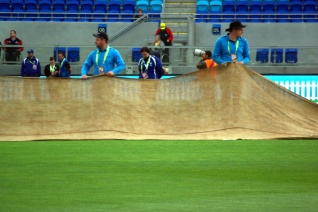 Grounds staff cover the wicket with hessian during a light shower.

The South Africans enjoy messing about with a soccer ball.

A tangle of arms and legs

The heavy covers go over the hessian if the rain is heavy or prolonged. 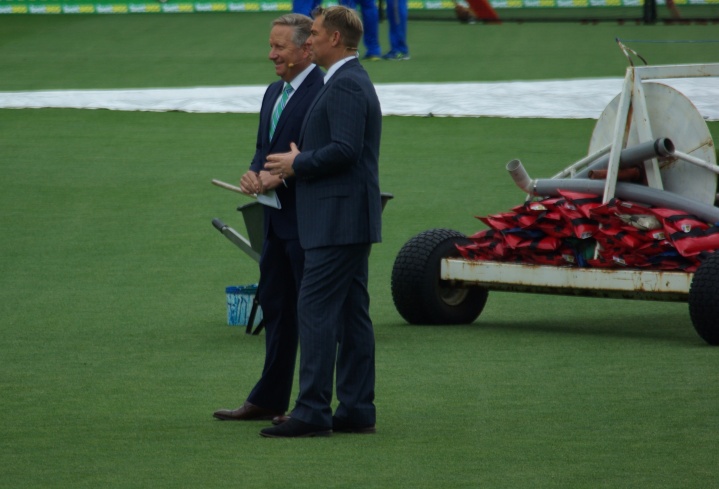 I don’t recognise many of the players. Hashim Amla is the only South African I’m sure about and even some of the newer Australian players I’m not too familiar with. Two Australian players are in the team for the first time but at least I can recognise them because they are training in their brand new baggy green caps instead of the usual baseball cap. In these situations I generally opt to take as many photos as I can knowing that I will need to edit them later and I can check then to get names of anyone I haven’t recognised.

Note*: I know this blog gets a few visitors from South Africa so please accept my apologies if I have mis-identified any South African players and feel free to correct me.

I do recognise a lot of the commentators. Most of the Channel 9 team have been working at the station for years and all of them are former players. I also spot a former South African player, Shaun Pollock, doing commentary for his national television station. 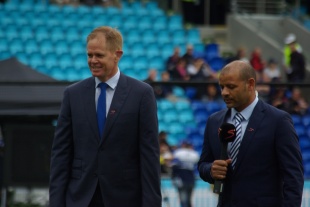 After the coin toss to see who will bat first, the ” Welcome to Country” by the local indigenous community and  the anthems play begins with Australia batting first. What a disaster that turned out to be as wickets are lost immediately with the opening batsmen getting out for one run each. In fact the whole morning is like that with  the batsmen falling instead of the expected rain. 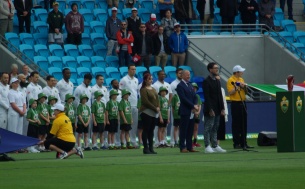 At the lunch break the ground is filled with the Milo Into Cricket kids playing multiple games of cricket while the ground staff and their tractor also reappear in case of rain. There was a light sprinkle that sent the players off for about ten minutes but not the downpour everyone had been predicting

The Australians lasted for less than an hour after the lunch break before they were all out for 85, over half of those runs made by the Captain, Steve Smith, who ran out of partners in the end and was left unbeaten on 48. After a short break for the pitch to be rolled the South African innings commenced. The Australians who were now fielding received plenty of “advice” from the small but vocal crowd. Bellerive is a small ground and as Test Matches are not accompanied by constant rock music and other distractions it is easy to hear the hecklers. There was support too of course, whistles and cheers for the few boundaries and the usual chorus of “Aussie, Aussie, Aussie, Oi, Oi, Oi.” coming mainly from the wet area where some fans had their first beer soon after 9am. 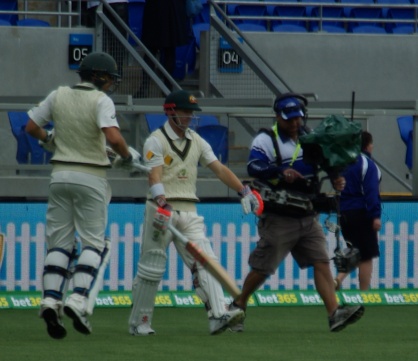 The South African team walk out to field.

A wicket is taken. 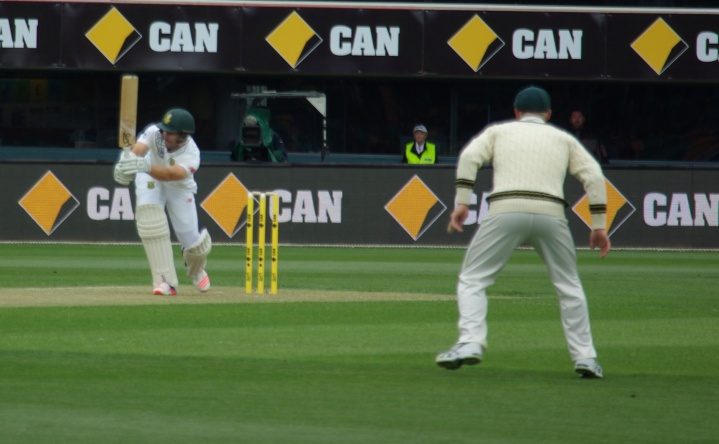 One of the South African opening batsmen.

End of Day One

I took a lot of photos but by 3pm I was feeling rather cold and as I didn’t want to miss the bus home to Geeveston I left. Of course as soon as I did the Australians took four wickets but they still ended day one badly behind. On the shuttle bus that took us back to the city the consensus seemed to be that we were rubbish but everyone had enjoyed their day at the cricket anyway.

For those who want to know what happened the rest of the match went like this:

Day  One: Australia all out for 85. South Africa lose 4 wickets by close of play.

Day Two: It rained all day and there was no play whatsoever.

Day Three: South Africa regrouped and built up a big lead requiring Australia to make 241 runs just to make South Africa bat again. They are all out for 326 At the end of Day 3: Australia had lost two wickets.

Day Four: Australia was unable to make enough runs being all out for 161. South Africa won by an innings and 80 runs.

Day Five: Not required. Australian players, coaches and selectors tearing their hair out trying to work out how to improve before the next Test Match in Adelaide which starts on 24 November.

I took far too many photos to put in this post but if you would like to see more head over to my Flickr photo stream where I have a cricket album to see the best ones, well the ones I liked best anyway. As an exercise in photography I think it was a worthwhile day. I got used to handling my big lens and most of the photos in this post were taken with it on maximum distance. I cropped most of them and in most cases the results were acceptable. It was also a good opportunity to practice sports photography. I found that I could focus and press the shutter faster. Some photos were too blurry to be useful but as I took over a hundred during the course of the day I did expect that some would be no good. I probably missed more close up shots because I didn’t feel comfortable taking a photo if the person was looking at me. Allyson is much better at that type of photography than I am. To end this post I’m going to share a few more of the photos that she took at the Michael Clarke book signing the day before the Test Match began.