This week Cee has asked us to show houses and / or barns. I am very interested in architecture and the built environment so I knew I would enjoy this challenge. Most of the photos are from my archives but I did have the opportunity to take a couple of new ones while I was away in Adelaide recently.

Here are some older style homes in the suburbs of Adelaide, South Australia.

In many cities former industrial sites and older homes like the ones above are being demolished to make way for apartment blocks like these. I do not approve.

The apartment in the next photo is well known to many older Australians who remember the TV series “Number 96”. This is the apartment block used for the exterior scenes in the show which was filmed in the Sydney suburb of Woolhara.

The next homes are convict era cottages in Tasmania built in the early  to mid 1800s followed by a couple of grander homes from the same era. 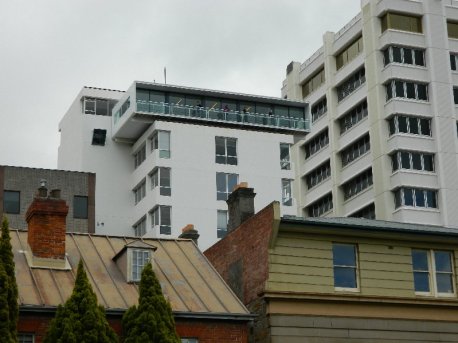 Apartment in a pod.

The old grain silos at Salamanca now converted to apartments