Not long ago I photographed a Masked Lapwing, commonly known as a plover on the piece of land adjacent to my house. I commented at the time that these birds visit that area quite often. They never come into the back garden but they do like the lawn beside the driveway where they grub for worms and other insects.

Last Sunday I noticed a pair of them in the driveway acting in a very territorial way walking about and screeching. I hadn’t seen them act that way before.  As it is spring I wondered if it had something to do with the mating season although one of the birds seemed to be standing rather oddly and I did wonder if there was something the matter with it.

The following day I found out what it was. Chicks. The adult birds were walking about screeching but on the lawn were four chicks. I’d never seen plover chicks before so I was very interested. I would love to have photographed them but it was raining heavily and very windy as well. I contented myself with watching them out of the kitchen window. Soon the chicks ran to their mother and snuggled in under her wings. She stood there in the pouring rain and wind protecting them from the elements and predators. She had no shelter at all and I felt sorry for them. I wished they were in a safer, drier place. I found a picture on the internet showing what the chicks look like. 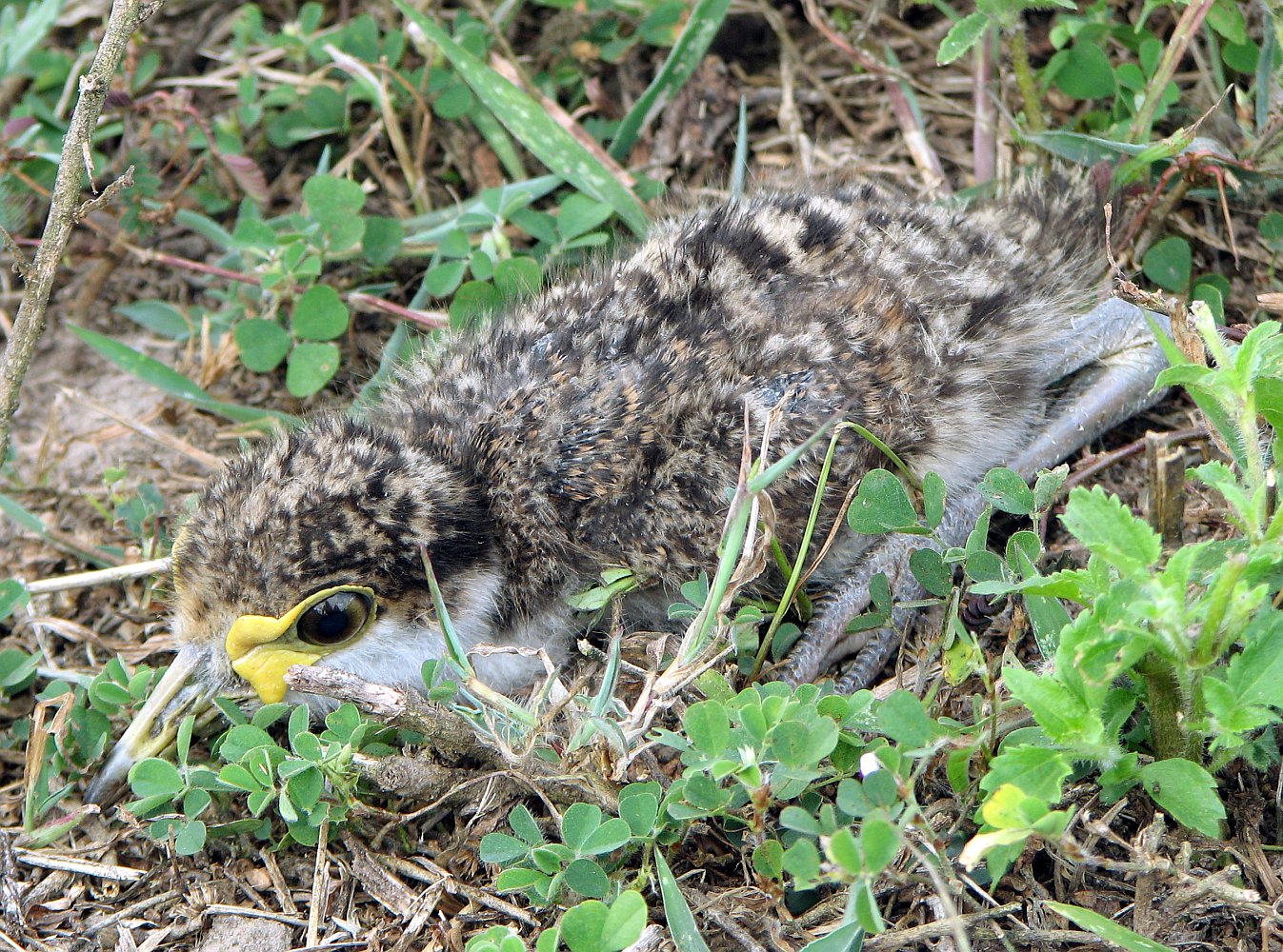 Later I spent some time reading  about plovers because I wondered where they had been nesting and how long it would be before the babies could fly. They build their nests on the ground, it is described as a single scrape usually away from ground cover. They often choose to nest in places like road verges, playing fields and other places you would not think were great nesting sites. The birds mate for life and they choose a territory during the winter; the female will lay up to four eggs which both parents take care of. Once the chicks are hatched they leave the nest within hours and the parents guard them while they wander about feeding themselves. That is the reason for all the screeching as the parents protect them from harm, even swooping on any creature they consider a threat including humans. According to what I have read the chicks will not fly until they are six or seven weeks old. I have no idea how old the ones I’ve seen are but I suspect not very old.

The next day I looked for the plover family again but contractors came to cut the grass on the part of the land that belongs to the power substation next to me. I was worried about the chicks and didn’t see the family until late in the day. They were up the top of a slope and I could not see how many of them there were. It was only late the  next afternoon when they were down on the lawn again that I was able to count them properly and I was very relieved to see there were still four of them.

The weather was bad again but I decided to try to take some pictures with my 300mm zoom lens through the window. Naturally they did not come out well and I had to crop them a lot. I will keep trying though. I might risk going outside to take some when the weather improves but I ‘ll have to be careful or I’ll upset the parents.  When I think of all the things that could happen to these little birds I feel quite anxious about them but I know there is nothing I can do about it.

I hope I’ll see the chicks grow up over the next few months and be able to continue to take photographs of them.