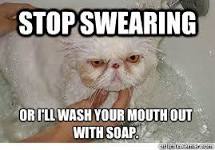 I want to say first up that I do swear on occasion although there are some words I won’t use. A salty word when you are angry and want to make a point, when you hurt yourself or when considering the latest stupidity of politicians is almost inevitable these days. My mum didn’t swear much. She considered “Bloody” and “Damn” were pretty bad words and used them sparingly. I never heard her use the “f” word or the “c” word at all.

When I was young you never heard that kind of language on television or on the radio, songs were banned for language a lot less offensive than that. Times have changed and some of these Anglo-Saxon words are more acceptable these days, after all you hear them in the real world all the time. When I worked for the railways there were only a handful of women in the depot and naturally there was a lot of swearing as you’d expect in a workplace where men were working with stubborn machinery. Nevertheless, in the break room if the language was getting too blue one of the men would nearly always say “Ladies present.” and there would be apologies to us. Actually it didn’t bother me that much because it was not directed at me and as one persistent swearer tried to explain. “I don’t mean it in a bad way. It’s part of me language.” he was a nice guy and I knew what he meant.

The trouble is that it seems to have become part of everyone’s language now and nobody cares any more. Some people can’t talk without swearing in every sentence. I have some young neighbours who spend a lot of their spare time fixing up cars. I expect there will be a bit of language from time to time but when I can’t sit in my own garden and enjoy peace and quiet without being disturbed by loud arguments punctuated by “effs” and “cees” I feel enough is enough. I feel very tempted to pop my head over the fence and say “If you can’t have a conversation without swearing at least do it quietly.” I don’t because I don’t like confrontation and from their point of view they are not doing anything wrong. They are on their own property after all. So instead when I’ve had enough I go back inside.

But there is no escape there either. I turn on the television and everyone is swearing like troopers there too. Recently I turned on to a show, I think it might have been “Deadwood”, something I had never seen before. The dialogue was full of swear words from the moment I turned it on. I don’t know if it is a good show or not. I could not watch it long enough to even find out what it was about. I had a similar experience another time. I saw advertisements for the British police series “Babylon” I thought that it might be worth a look having good memories of other British police dramas I’ve enjoyed. Big mistake. I watched one episode and never wanted to see another. Admittedly this time it was not just about language, I did not find one likeable character in the cast and if I can’t relate to any characters I soon stop watching. However there was a lot of bad language and I suppose it was meant to add realism but I didn’t like it. I am seriously thinking of giving up my pay TV subscription because there are so few new shows that I enjoy.

Radio has changed too, not only do they now play songs that would previously not have made the air but some DJ’s talk that way themselves. This is particularly so on the stations that play the more alternative music.

Now I probably sound like a grumpy old lady which is fair enough because that’s how I feel some of the time. My point is not that nobody should swear ever but that there is too much of it these days.  Does it have to be in situations that don’t require four letter words? If we must swear  could we please find milder alternatives and leave the X-rated stuff out of our every day conversations? Can we not make films and TV shows and write books where people try to behave like professionals if not well-mannered people?  It’s not  necessary. I don’t think Bogart, Cagney, John Wayne or any of the movie tough guys of the past needed to swear all the time to prove they were real men.

Apart from the fact that swearing is offensive to many people. It is a bad example to set for children who learn words without understanding what they mean or why they are not appropriate. Most swear words just sound ugly anyway. In a language as diverse as English there ought to be other words that express our feelings just as well.

After writing this post which is my personal opinion I decided to see whether anyone had written a list of TV shows that had the most swearing. Of course someone had, there are lists for everything on the internet. I also came across this article which reflects what I feel rather well. I swear I had not read it before writing this.

Is 99 swear words too many in one hour-long TV show? Love Island fans think so 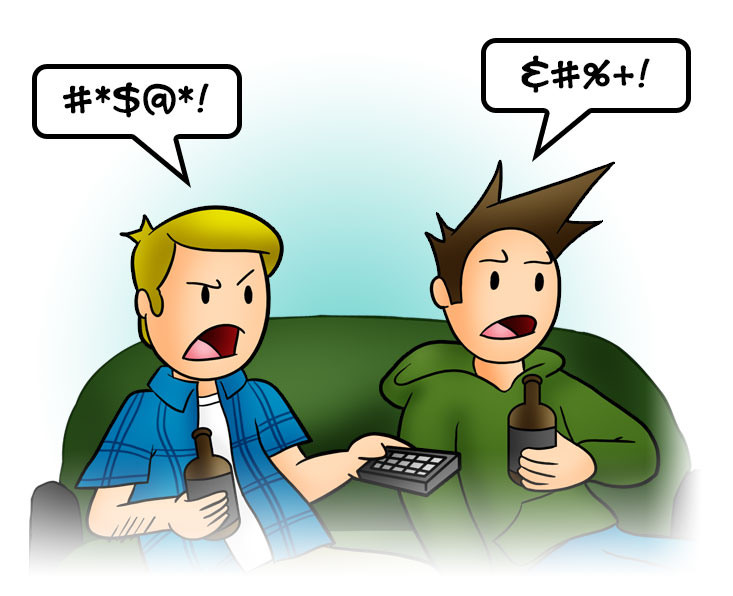