What’s New At My House

Readers of my doll blog may be familiar with a series of posts I call “What’s New At The Tammy House” in this post I will show you what’ s new at my house.

I’ve mentioned several times in the past few weeks that I was having new front steps and a path put in the front garden. My old front steps were made of concrete and apart from being ugly I had been getting more and more hesitant about going down them so initially I had thought of getting a handyman to install a grab rail. In the back of my mind I thought about doing away with the concrete steps and having some new wooden ones put in but I thought that it might be difficult for “the garden guys” to demolish the old steps and the builder I’ve used for other jobs  in the past is like the Invisible Man these days. He’s getting extremely hard to pin down to a date to come and look at work I need done.

I wanted a new front path because I wanted to redirect visitors who have always cut across the front lawn and down the path between the rose bushes to get to the front door. As my photinia hedge grows taller and thicker that wouldn’t  work very well, the old roses were straggly and the concrete path was cracked and stained.  While discussing this with Jason and Brodie one of them came up with the suggestion of new steps down to the path. They assured me that they could do the work. I knew they could, they built the pergola. As for the concrete steps, no need to demolish them they would just build over the top of them.

Although the weather has made photography very difficult I’ve tried to record the stages of building as I usually do.

We decided on a timber boardwalk path like the one at the back and the guys commenced work during some truly horrible weather. The old rose bed was shortened and the paving removed. Nobody would mistake it for a way to the front door now.  An unpleasant surprise was when I was told “You know those posts supporting the veranda? Well, they aren’t.” They were rotting at the bottom as was most of the decking on the veranda so the lot had to be replaced. I wasn’t that surprised really as the gutters had to be replaced a few years ago and when it’s wet there always seems to be a lot of water around the front of the house, that will be fixed too. 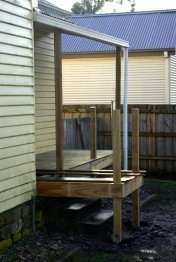 The work is nearly finished.

It took a few visits and I was without the use of the front door for a few days but slowly things came together. I didn’t really miss using the front door that much as I had been avoiding doing so anyway but now I think it will be my preferred entrance as it will save me walking down the driveway to get to the back door.I’m looking forward to spring when we can finish by planting some new lawn and shrubs.

In the meantime there has been some activity indoors. I had some new flooring laid in the laundry and back room where I feed Cindy and Polly. It had been bare concrete and very hard to keep looking nice so I bought some slate patterned vinyl. My next job which I may attempt to do myself is to paint these rooms. I’ve been washing walls and getting ready to do the job as soon as I buy some paint and a better step ladder. 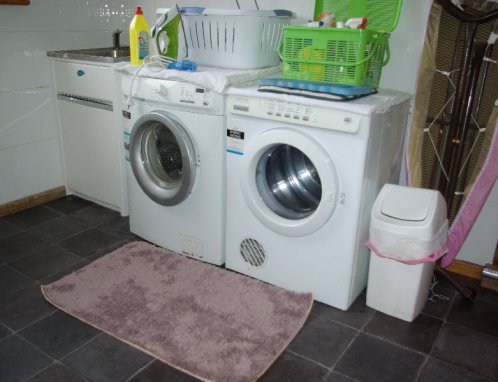 A new look for the pet area.