Composing myself in May

For our latest assignment Cee has asked us to show landscapes. This is probably my favourite type of photograph. I really took to photography because I wanted to capture the things I saw that I found beautiful or interesting or that I was afraid I would not see again.

I have chosen some older pictures today as I’ve not been out and about with the camera much lately.

First of all here is a recent one that I took of the City to Sea Bridge in Wellington, New Zealand. I really liked this bridge and I thing that what attracted me to it was the shapes. There is a lot of geometry going on here as the artist has used a lot of shapes in his sculpture. I also like the texture of the timbers and  the vertical poles just make the picture a bit more interesting.  I think that rule of thirds also applies here as the scene divides into foreground, buildings and sky. I didn’t love the orange cones where some work was taking place but sadly I didn’t have the option to come back another day.

Here is another cityscape. This one was taken high above the city in an observation wheel.  Again there are a lot of interesting shapes and vertical lines in the high rise buildings while the older smaller buildings below give some perspective I think. I quite like the harmonious colours in this picture as well greys, blues and white with a little bit of reddish-brown as a contrast.

This is Darling Harbour in Sydney taken in March. It was getting towards sunset and the buildings took on a kind of golden glow which I liked. I think that I must have been using the geometry rules unconsciously in my cityscapes because I had not given them any thought in any of these pictures but city buildings do lend themselves to that type of picture with high-rise buildings reaching for the sky. There are strong horizontal lines in this picture too through the middle of the picture which divides it nicely into three sections, the boats, the buildings on the esplanade and the high-rise buildings in the top third.

The following three photos were taken closer to home. The first is the Huon River at Franklin. I don’t think this would have been a very interesting picture without the rowing boats to give some sense of the width of the river. I like the reflections of the boat and people in the one in the foreground as well.

Still on the Huon but this time at Huonville. The river leads your eye on to the horizon and the reflections of the clouds make the picture more interesting I think. This picture is all cool colours so quite restful to look at.

The last one is Hospital Bay at Port Huon and was taken from a hill above the township. David actually found this spot and brought me up there to photograph it. The photo definitely falls into the Rule of Thirds category and has horizontal lines in the fence line and trees and the opposite side of the bay. From the hillside you can see the Port Huon jetty and a fish feeding boat which give perspective to the scene as do the cluster of homes on the left.

If you want to take interesting landscapes using at least some of the rules we’ve looked at certainly helps. I  think the trickiest thing with them at least for me is trying to capture the picture that expresses how I felt about what I saw. Sometimes you just can’t do it because the scale is too great to comprehend in a picture. I’ve tried to take pictures in some places where I’ve seen for example, a forest from the road or from above. I can take the picture but when I look at it I just see a mass of trees and it doesn’t mean anything. Below are two photos I took while travelling on the West Coast Wilderness Railway between Strahan and Queenstown. In the first one you see the trees and the timber pole but it doesn’t really give a good sense of what the picture is about. The following one does it better I think. 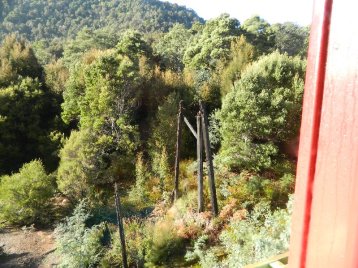 Here I’m trying to show the forest and ruins of an old bridge near Strahan. 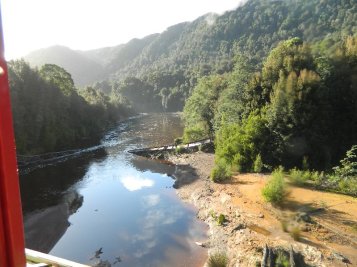 In this picture I think you get a better sense of it.