A Rainy Tuesday in Tauranga

Here is another installment in the story of our cruise holiday.

It was raining when we left Napier and unfortunately the wet weather followed us. When we arrived in Tauranga the following morning it was still raining steadily and did not look like letting up. A lot of people went off on tours to Rotorua from Tauranga and I think others went to see places associated with the “Lord of the Rings” films. We were going to stay in the town. Tauranga seems to be quite a large place.  The area where we were berthed was a different neighbourhood from the city centre and had the weather not been so bad we would have explored that area firstand caught a local bus to the city centre later on.

Instead we caught a shuttle bus to the city centre and despite the poor weather Naomi and I tried to see as much as we could on foot. We had a look around the shops and visited an arts and crafts store on the waterfront where we saw several things we liked but which were too bulky to bring home.  We had planned to do a self guided walk of the town after lunch  to see some of the older buildings and parks but the rain set in so badly that after a short time we gave it up. It was just too wet.

However, our day in Tauranga was not a total loss. We were walking along the waterfront in a light drizzle when I spotted a group of sculptures  that caught my interest.

I called Naomi to come and see. It was a group of dogs who had a cat bailed up on a pole.  These turned out to be characters from the Hairy Maclary stories. The author of these children’s stories, Lynley Dodd, came from the Tauranga area. I don’t often get excited by sculptures but these delightful animals made our visit to Tauranga worthwhile. For those who are not familiar with the Hairy Maclary stories, and I wasn’t although I had heard the name, there is a link at the end of this post.

Slinky Malinki was blacker than black.

Hercules Morse as big as a horse with Zachary Quack.

We ended up catching the bus back to the ship earlier than we’d have liked to and we will have to return to Tauranga one day to explore it properly. 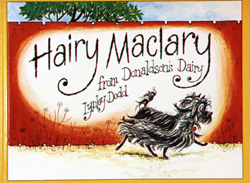