Our next port of call was Napier in the Hawke’s Bay area. I had been looking forward to seeing Napier more than any other port because of the large number of art deco buildings in the town.
The reason there are so many is that on February 3 1931 an earthquake rocked Napier and the nearby town of Hastings. Many people were killed in both towns and buildings were destroyed. In Napier fires started in three local chemist shops and with little or no water pressure to fight the fires several blocks of the town’s business district were completely destroyed.

As a result of the earthquake both towns were rebuilt over the next two years and Napier in particular gained a large number of buildings designed in the art deco style that was popular at the time.
In recent times Napier has embraced its architecture as a tourist attraction and now hosts an Art Deco weekend every year as well as organising tours and events for visitors all year round.
I love this style of building myself so I was very excited to be able to spend a day in Napier.

When we arrived on Monday morning it was looking a little bit overcast but the rain stayed away as we were bussed into the town centre.Outside the tourist information centre were stalls touting tours of the town and surrounding area. There were vintage cars parked outside and the local guides were dressed in period costume.

My first impression was that Napier was much larger than we expected. Naomi and I headed off down the main street trying to take it all in, there were so many beautiful buildings to admire. I could not stop taking photographs. There were some shops selling vintage or vintage inspired clothing and gift ware the largest being the Art Deco Centre near the sea front. In the shop there was a small theatrette showing a film about the disaster. I didn’t get a chance to see it but Naomi did and said that it was very interesting. I found a film on YouTube which I believe might be the same one and have included a link at the end of this post if anyone would like to see it.

I’ll let the pictures tell the story from here and try to give a little taste of what we saw.

Statue in the main street of Napier. 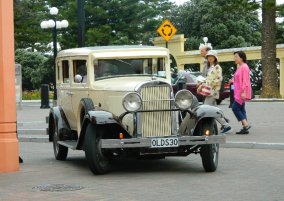 One of the cars used by the Napier’s Art Deco Trust. 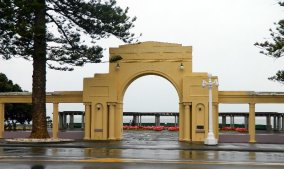 Arch at the sea front. 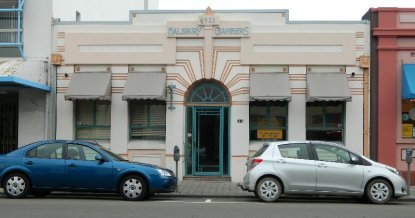 One of the many art deco buildings in the main street.

After a while Naomi and I decided to split up. She wanted to visit the Art Deco Shop again and go for a walk on the esplanade. I had seen a park with beautiful flowers which I wanted to photograph. It was raining by this time and I had to shelter for a while but the flowers were so lovely that I went out into the rain to photograph them once it had slowed to just a drizzle. 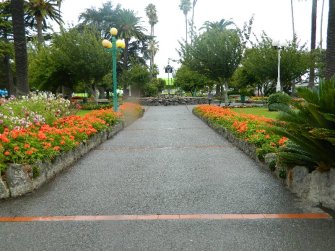 Waterlilies, Clive Park, Napier, NZ
Our day in Napier was much shorter than we would have liked as we had to be back on board Explorer of the Seas before 3pm. It was still a bit drizzly when we returned but we went out on deck to see the last of Napier as we sailed away. On the shore a jazz band played for us until we sailed and then a gentleman made a short speech thanking us for visiting and they all stayed and waved as we left.

If you would like to know more about the Hawke’s Bay earthquake of 1931 here are some links and some information about Napier’s Art Deco Trust and what it does.
http://www.artdeconapier.com/
http://www.teara.govt.nz/en/historic-earthquakes/page-6
http://www.napier.govt.nz/services/civil-defence-emergency/previous-incidents/napier-earthquake-1931/