I don’t very often find myself on a major highway. We don’t have a lot of multi lane highways in Australia and when I have been on one, usually while trying to get in or out of Melbourne, I have usually had my navigators hat on and been too busy map reading and looking for signs to take photos. David and I drove up the Hume Highway from Melbourne to Canberra once but all the photos I took on that journey were taken in towns off the highway. We didn’t find the highway particularly interesting. I’ve been on the Western Highway between Adelaide and Melbourne both with David and with Naomi more times than I care to mention but have never taken a lot of photos on the highway itself, mostly in the towns where we stopped. The only one I found showing the highway itself was once when we parked on the side of it to photograph a train. People who know us would say that was typical.

In Tasmania our biggest highways are still only two lanes in each direction but that doesn’t mean we don’t use the word highway to describe major roads. The highway I have documented in pictures the most often is the one I live on.The Huon Highway.
This road runs from Kingston just outside Hobart to the far south of the state passing through Huonville, Franklin, Port Huon, Geeveston and on to Dover.
The photos here were taken at various times and places on the Huon Highway and also on the Southern Outlet which is the highway that connects Hobart to Kingston. In most places the road is merely one lane in each direction but the section that climbs up to the top of Vince’s Saddle has two lanes on the up track in each direction. The Southern Outlet is a two lane highway.

The Huon Highway is narrow and winding especially south of Geeveston. There are few opportunities for passing and motorists are often frustrated when sharing the road with heavily laden log trucks, and in season, tractors hauling hay or apple boxes. Caravans and motorhomes are a common sight between November and May and often hold up traffic too. However, when you are not dealing with any of those things,  going around a sharp bend or watching out for roadworks,  fog or ice in winter you are permitted to do 100 kilometres an hour  which is highway speed. Since we came to live here the lighting has been improved with the addition of more “cats eyes” on the road and the verges have been widened in places but it is probably not most people’s idea of a highway.

The pictures in the gallery were taken between my home and Geeveston  at Huonville and from the bus either on the Huon Highway or the Southern Outlet. 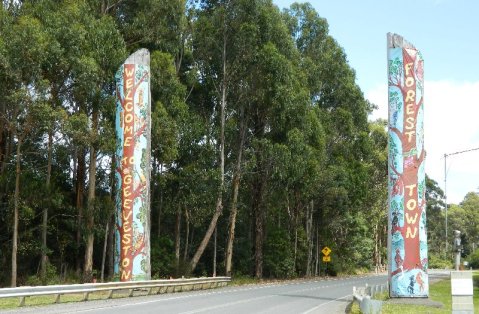 These big logs welcome everyone to Geeveston. 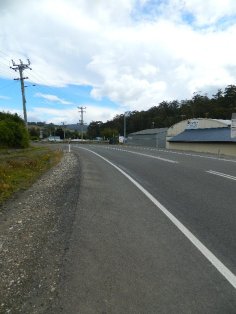 The outskirts of town. 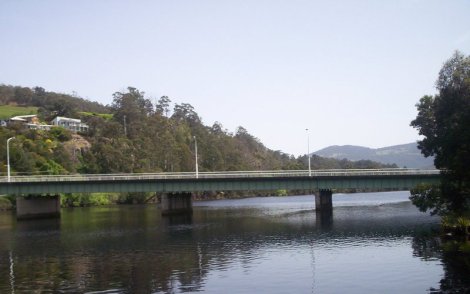 View from a bus window

Our route to Hobart

Snow and ice on the road

Breakdown on the Southern Outlet

Bad weather on the Southern Outlet