As I have explained the main dining area on Explorer of the Seas is called the Sapphire Restaurant and covers three levels. Although the specialty restaurants we visited were very nice this became our favourite place to have dinner. We loved the decor and the great service we received.

Our regular table was next to the atrium and although the view was partially blocked by a curtain we enjoyed looking down to the lower levels of the restaurant especially on nights when there was some kind of entertainment. A couple of times members of the kitchen staff who played musical instruments performed a couple of songs and on other occasions the waiters or chefs paraded round the lower levels of the dining room and then all stood on the staircase and sang.

There were two waiters taking care of our table and several others nearby. Their names were Pepito and Anthony and apart from being excellent waiters they were polite and friendly and Pepito in particular liked to make people laugh.  They were obviously quite used to having their photos taken because when I brought the camera in  on one of the last nights they were both quick to strike a pose.

On several evenings we noticed a rather sad-faced waiter going around obviously trying to interest diners in buying something. He came to our table a few times and not being sure quite what it was he was selling we said “No thank you.” Then, one night he turned up while we were chatting to Pepito between courses and  he introduced him. This time he was taking bookings for an Indian cooking demonstration and lunch. Now that we had been introduced we felt a bit sorry for him because we kept saying no so this time after he ha explained about the lunch we said, “Come and see us again tomorrow and we’ll tell you.” We discussed it and after a while decided that it might be interesting to try some Indian food. Both of us had tried it once and quite liked it, plus a tour of one of the galleys was included and we both wanted to see that. So the next night when the waiter arrived we said that we would go. It was $25 and it sounded like good value for money.

The demonstration was held in a corner of the dining room. There were probably thirty or forty people I guess.  We were given a drink of Mango Lassi and then the chef demonstrated how to make it. We liked it, it was somewhat like a smoothie. After that he demonstrated  how to make Tandoori  Baked Lamb Skewers and  Chicken Tikka Masala. I did try to take photos but from where I was sitting I could not get any worthwhile pictures do here is one I borrowed from Wikipedia. I’m sure there are many variations of chicken tikka masala as it is pretty popular in Britain too apparently but it was a first for us.

After the demonstration we were taken in groups to see the galley. Our group was waiting quite a long time so our guide decided to take us to a different area. This was the galley where they prepare meals for room service and do some prep for the evening meals. Consequently it was not as busy as the galley where our lunch was being prepared but it was very interesting to see behind the scenes. One of the chefs showed us how he carved melons decoratively.

The galley was spotlessly clean and I was impressed when we were told that all the food must be changed every four hours as a safety precaution. We were allowed to take photos although not video so here are some that I took on the tour. 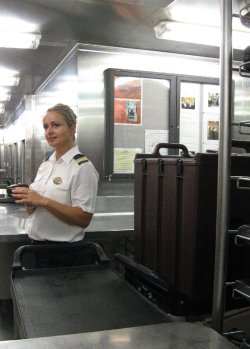 This young lady was our guide. 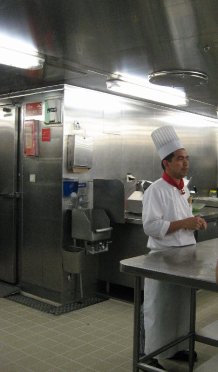 One of the chefs.

Galley area- Explorer of the Seas.
After the tour we had lunch which consisted of the dishes we’d seen demonstrated and a couple of others. Some of it we liked, some not so much. We sat at a table with several other people, the only time on the cruise when we shared a table. Naomi and I are not really foodies so we felt a bit out of place. I enjoy my food but I don’t want to spend a lot of time talking about it. Anyway it was a very interesting couple of hours so we were both glad that we went. We plan to make some Lassi ourselves one day now we know how to do it.

In Part Four of the tour we’ll visit the pool deck.