This month I’ve decided to dabble in Irene Water’s Times Past blog challenge. Here is what Irene asks us to do.

Times Past is a monthly prompt challenge that I hope will give us social insights into the way the world has changed between not only generations but also between geographical location. The prompt can be responded to in any form you enjoy – prose, poetry, flash, photographs, sketches or any other form you choose. You may like to use a combination of the two. I will also add a series of questions for those that would like to join in but don’t know where to start.

Heading your response please put what generation you belong to, your country and whether you lived in a rural or city environment at the time of your story.

Prompt No 3. Beach Memories. Did you go for holidays to the seaside? What kind of swimming costume did you wear? What activities did you do? Did you slip slop slap from an early age or did you bake yourself to a crisp? Did you eat ice cream after a swim? If so what kind did you normally have or was your favourite. The first time you went to the beach without your parents who did you go with? Any beach memories you’d care to share – I’d love to read them. 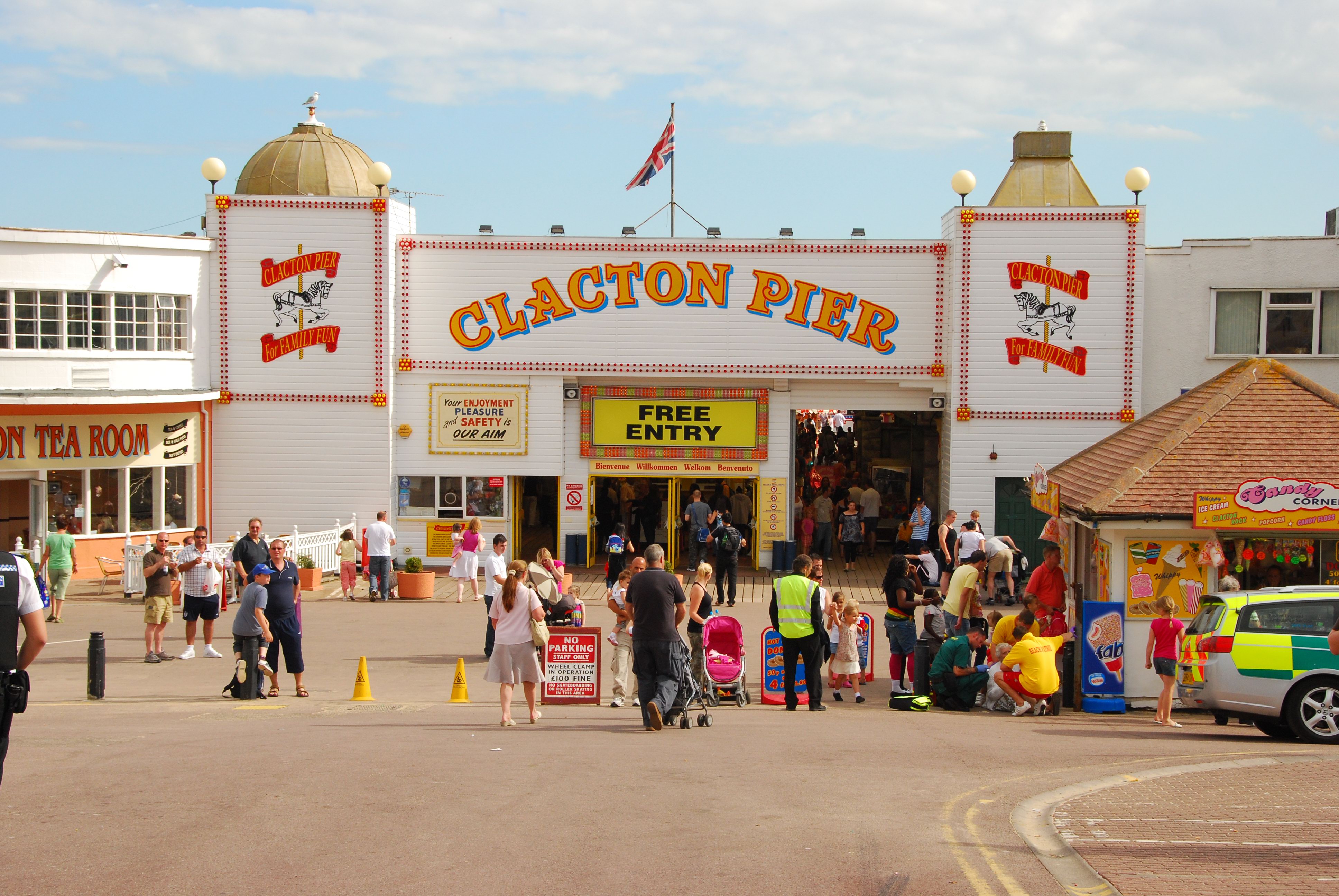 By Pkuczynski – Own work, GFDL, https://commons.wikimedia.org/w/index.php?curid=6071093

I lived in England until I was eight years old and every summer mum would take us to visit our grandparents in Clacton on Sea for  most of the month of August or to her brother’s home in Brightlingsea while his family vacationed elsewhere. I enjoyed those holidays. Clacton Pier was a fascinating place with a Helter Skelter, carousels, dodgems and many sideshows. Further down the beach was Butlins where we were once taken for a day visit. On the beach itself there was Punch and Judy and my favourite, the donkey rides. As we didn’t have a lot of money in those days these things were a treat and we did not do all of them every year. If you went to the Pier one day it was sandwiches and a flask of tea on the beach the next. I remember bright sticks of “Clacton Rock” which we were allowed to have once a visit for a treat, ice cream “cornets” or a tub (dandy in Australia) or perhaps an iced lolly shaped like a rocket, it was the sixties after all. People sat in front of their “Shally’s”  in deck chairs and read the papers or went to sleep in the sun. I wished we had one as well. I loved going past the little shops that had racks of postcards, buckets and spades and fishing nets spilling out of the doorways. I still have a love of British seaside towns to this day.

In Australia going to the beach was a very different experience. We lived in Elizabeth, South Australia, a long way from the beach so as a child trips to the beach were made with my aunt and uncle and their family.

Imagine; it’s something like ninety degrees fahrenheit and three adults, four children and a baby are packed into a non air-conditioned car for what seemed like hours.  On the way to Semaphore Beach we passed the abbatoirs which stunk and the sewage works which smelled just as bad. My aunt and uncle smoked, my cousins fought over the window seats, mum always wanted the windows closed, everyone else wanted them open. I usually felt like I was going to be sick.

The beaches were longer and more sandy than the stony English beaches I was used to but there was always a lot of smelly seaweed.   At Semaphore there was a fun fair which my cousins always wanted to go to but were not usually allowed so of course my sister and I could not go either. We would buy ice cream though and sit under a striped canvas beach shelter in the shade if we were not paddling or playing in the water.  We’d do the things kids do, bury each other in the sand, dig holes and make sand castles. It was nice and cool in the sea but then you would have to rinse the salt and sand off, get dressed and get back into the hot car with grumpy, smoky adults to go home again.

Middle Beach was different again and in my mind it was not a proper seaside beach.  It had mangrove swamps and to my mind was not a very attractive place in those days. There were no rides, donkeys or ice cream, just sand, swamp and flies. The beach was not my favourite outing I’m afraid. 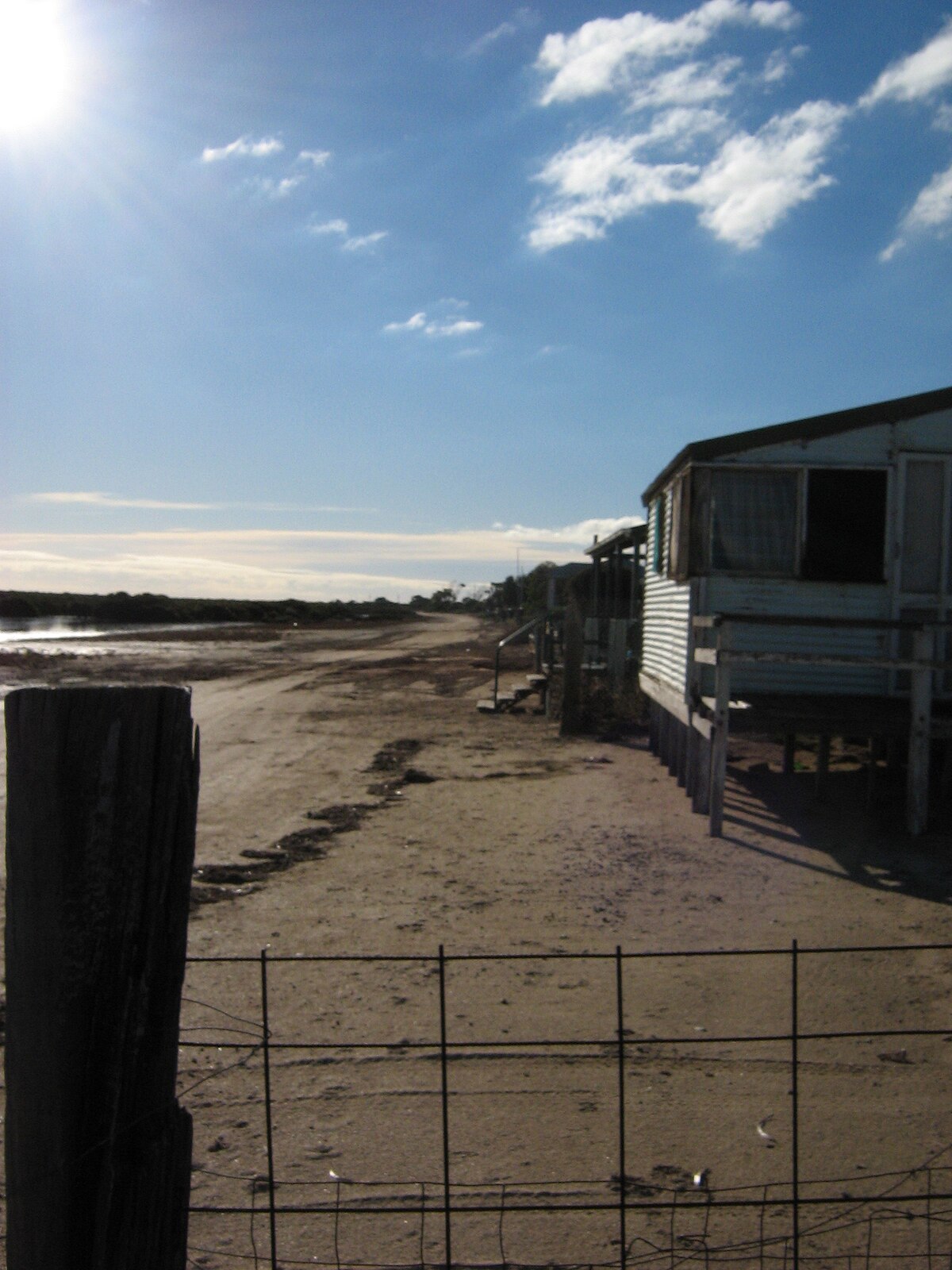 As an adult I rarely went to the beach. I did with my husband when we were first going out together. We decided to spend the  day at Glenelg, went to the fun fair, played mini golf and went in the water but he managed to get himself so sunburned that he was too sore to do anything for a week.  After we were married we moved to the beachside suburb of Hallett Cove. It’s a small rocky beach and we used to enjoy walking there with our dogs when it was quiet. I would walk there most days during the 25 years or so that we lived there but not to swim or sunbathe. I still don’t like the hot sand burning my bare feet or being out in the glaring sun for too long but I do like being beside the seaside.