Composing Myself This Week

This week’s Cee’s Compose Yourself Challenge was to present photos using two-thirds of the frame. I do enjoy these challenges especially when I know I will be going out to take pictures as it reminds me to think about different ways of doing things. I went to watch cricket at Bellerive this week so the first two of my pictures were taken at the match. I usually crop my cricket photos quite a lot because it’s sometimes difficult to avoid getting a lot of unwanted people and objects in photos of activity on the ground. It was my first visit to Blundstone Arena since the World Cup match I attended in March so I took a few pictures of the grandstands as well as the players. Since my last visit this bronze statue of Ricky Ponting has been installed at the ground and I took several photos of it. This is one is a bit different from the others I took because I pointed the camera upwards to take it. I like the sky as background in this one.

The next one was taken during the lunch break when the ground is invaded by hordes of small children playing their version of cricket. The sun had come out by this time and I thought the blue sky in the top third of the picture contrasted nicely with the colourful scene on the ground and the watchers on the hill. 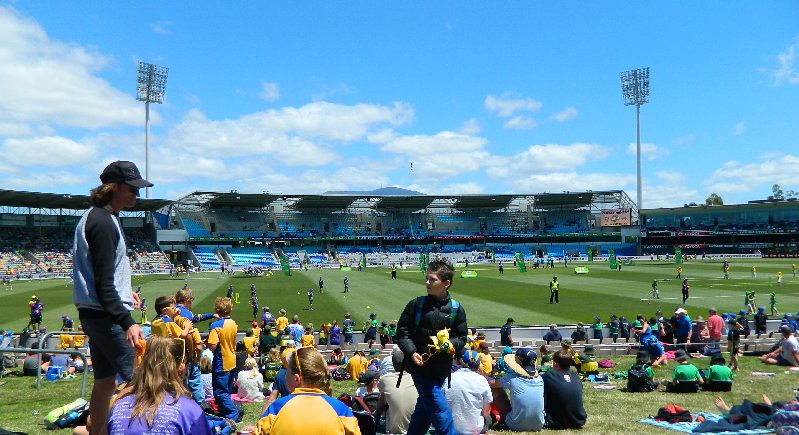 Lastly two that were taken several years ago on Hobart’s waterfront, always one of my favourite places. The first one a close up of Aurora Australis berthed in Hobart before departing for Antarctica. This photo has been cropped a bit at the bottom because when I got my first digital camera I did not know how to turn off the date feature and the date I took the photo was stamped on every picture. The last one uses the right two-thirds and shows Aurora Australis and another Antarctic vessel. I took these in mid winter because I liked the light.