Cee’s challenge this week involves the Rule of Thirds. For me this is an interesting subject to tackle. As I was going out today to take cruise ship photos anyway I decided to see if I could incorporate the rule into the photos I took. I think that I am more of a recording a scene type of photographer than an artistic one although the scenes I want to record are usually ones that are either beautiful at least to me, or interesting in some way. On the scene I think more about “what looks right” than any specific rule. However I know that I will probably edit when I get them on to the computer.
I discovered that amongst the pictures I took today and many of my previous ones I tend to divide my pictures along the horizontal thirds and sometimes the vertical ones. I don’t often put my subject in just one square of the grid. However in this first one I actually did do that.

The next photo I cropped to get the subject into a vertical third of the grid. I think it looks better than centred the way I took the picture.

Here is another one I played with while I was looking for photos for this post. I took this picture of a red moped in the foyer of a building I visited during Open House Hobart but I wasn’t all that happy with it. Tonight I made a copy and cropped it and I like the result much better. 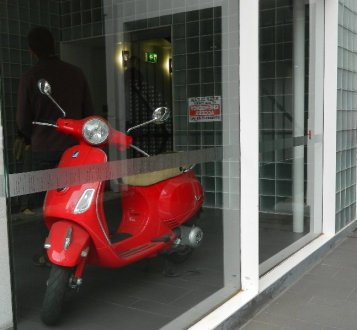 This one of the footings of the old floating bridge across the Derwent I took today and with the challenge specifically in mind. I wanted to show the water swirling round it as the photos on the nearby plaque suggested that driving across it was a very scary experience especially in bad weather. The next one in this set is also from today and also taken trying to use The Rule of Thirds although looking at it I think that I filled the entire grid. I included the car in the foreground to emphasise the height of the bridge.

I did say at the beginning that we went out to photograph a cruise ship. Voyager of the Seas is pictured here at Macquarie Wharf.  We tried some different locations today and this set was taken from Castray Esplanade at the back of the CSIRO building. I tried placing the subject in a different part of each photo. Here are three of them.

Voyager of the Seas