What is your favorite comfort snack food?

Well that would have to be bread. I love toast, raisin bread ( raisin toast yum), English muffins, crusty loaves and rolls. You name it. I probably eat way too much of it.

If you had to spend one weekend alone in a single store but could remove nothing, which store would you pick? (except food or beverage)

When I was younger I often used to imagine what it would be like to have free run of a department store. Department stores now don’t seem to be nearly as much fun, maybe that’s just me getting older. I probably would have picked one of Adelaide’s two main department stores, Myers or John Martins but I would want to go back in time to the 1980s or earlier. Myers had a good bargain basement but I think I would pick “Johnnies” I still miss it.

I’ve always been fond of window shopping but it would be even more fun to work my way through the store trying out couches and beds in the furniture departments and picking out what furnishings I’d buy when I won the lottery.

Even as a teenager I used to love to visit the china department. Mum and I would go and look at the beautiful Royal Doulton statuettes that cost hundreds of dollars. I always wanted to collect these and I believe it is partly because I could never afford them that I started looking at Barbies and realising that this was something that I could collect. Mum and I really enjoyed looking at dinner sets and other kitchen ware and then we would usually move on to Manchester to look at lovely bed linen and then to the area near the restaurant to admire or sometimes criticise the prints that were for sale.

Of course I’d go to the toy department to see the dolls, but I’d also look at the train sets, Scalextric cars and things like games and jigsaw puzzles. John Martins in Adelaide had the best toy department. When personal computers became popular they had a whole section of them and wandering in there and seeing how graphics were improving made me start to think it would be fun to have one. Hubby’s first computer, a VIC 20 came from there. I’d spend some time in ladies wear trying on clothes and in the hat department. We didn’t really wear hats but we found it hilarious to try them on so I’d really want mum with me for that too. I’d also spend a lot of time in the record and book departments. As it is the eighties I know there will be lots of albums that I will want to buy even though they will be vinyl. I loved the artwork on vinyl album covers and all the cool things you’d find inside them like posters and booklets.

Yes, department stores were a lot of fun back then and a weekend in John Martins would have been great especially if someone would come and open “The Buttery” so I could eat there too. I’d sit at a table by the window looking out on to North Terrace and later go and freshen up in what must have been the nicest ladies lounge room in Adelaide. I could spend the night sleeping on a water bed or one of those beds that must have been intended for rock stars that had clocks, radios and tea makers built in to them.  Anyone got a time machine they can lend me?

What was the largest city you have been to?  What is the one thing you remember most?

As to what I remember most, bicycles, lots of them and all sorts of other unusual vehicles carrying large loads. The red colour of many of the buildings. Seeing Tiananmen Square, this was only a few months after the protests there. I remember seeing people doing Tai Chi in a park near our hotel and the hotel “disco” which as it was a Chinese run hotel, was popular with local young people. It ended at 9pm when they played “Auld Lang Syne” which really amused us. We found the locals friendly, it was off season so there were not many western tourists around and a few students came up to ask if they could practice their English on us. This lead to us meeting a student whose father was a taxi driver and he arranged to take us sightseeing for the day for what came to about $A50 for the two of us. It was very interesting and we enjoyed it a lot more than going around with a tour group as we were able to spend longer in the Forbidden City than the tours usually do.  Tour groups is the other thing I remember, especially the Japanese ones lead by guides with umbrellas who they all followed like sheep. Beijing today is far more modern and westernised but I’m kind of glad we saw it as it was then when western tourists travelling independently were still a novelty.  Sorry that’s more than one thing but it’s a big subject. 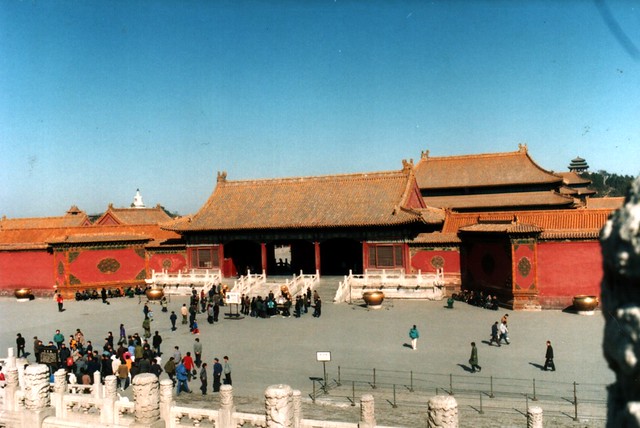 Finish this sentence:  It has recently come to my attention that ….

WordPress has been changing the format of the Reader. I am so tired of logging in to websites and finding that the format has changed since I was last there. WordPress you are a serial offender and I would like you to stop it. Now!

Last week was Hubby’s 60th birthday and while it was disappointing that he had to spend it in hospital I was able to take him downstairs to the cafe for lunch. He’d had an infection so I was afraid that would not happen. I’m grateful it cleared up just in time.  This week our toilet is being renovated and I’m looking forward to seeing that finished. Another job ticked off the list.