Which Way to the Grand Prix ?

This Sunday the Formula One Grand Prix of Monaco will be held at Monte Carlo. Before the Australian Grand Prix was held in Melbourne it was held on a street circuit in Adelaide where Hubby and I used to live. We attended every year and took hundreds of photos, most of which I still need to scan. The circuit ran on public roads in the parklands within a few minutes walk of the CBD. It was a fabulous event. I’m sure we had much more fun with it in our smaller city than the Melbournians who have lots of big sporting events. Of course security was less of an issue in those days too.

As the event was held in public parklands anyone could walk around the track once the roads were closed a few days before the event. We even had a Dogs Grand Prix the week before the race. There was often an off circuit event too where one of the Formula One teams would take a race car to do demonstration runs on a public road so everyone could see it. My favourite one was held near a suburban shopping mall where the car was to be displayed afterwards. When the event was over the driver just drove it to the shops. It was hilarious to see a formula one car at the traffic lights.

I’ve written more about the Adelaide race in my post Reflections of a Revhead.

The late Peter Brock’s Holden Commodore on the Adelaide circuit.

A popular support race was the V8 Supercars. This was from the late 1980s.

Pit Straight Adelaide c1989. The Start / Finish line was about where the building on the left is. 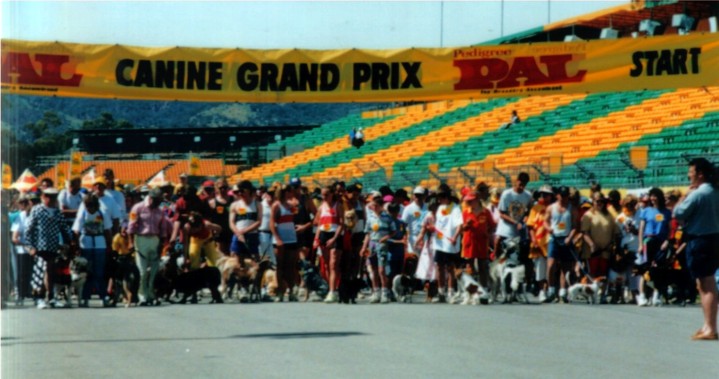