Would you prefer a one floor house or multiple levels?

I don’t think it would really matter to me that much as long as I had enough room. I do like the idea of having a basement for storage or having an upstairs room overlooking the garden but realistically as Hubby has arthritic knees and we’re neither of us getting any younger having upstairs rooms might be difficult. If we moved again which I really hope we won’t I would be looking for a one level house on a flat block which is more or less what we have now. Of course if we won lotto and could have an elevator a multi-storey house might still be an option.

If you have a TV, would you prefer the TV in the living room or another room?

Our TV is in the living room and that’s fine with me. We have two living areas, one has the TV, lounge chairs etc and the other did have our dining table which I’ve dismantled for the present and desks with our computers. When I’m working on the computer I don’t like being distracted by Hubby’s TV watching habits so usually I close the glass door between the rooms. At this point we don’t have TV connections in any other rooms and as reception is bad where we live an indoor antenna is useless. We do have a small portable TV and a DVD player which  is currently in the spare room. I would consider having that connected so that guests can watch the programs of their choice but I am not really bothered about TV in our bedroom as I don’t think we’d use it. I’m not so crazy about television that I’d want it in the kitchen either. If we have a clash over whose show to watch we record one and watch the other.

When you leave a room, do you turn the lights off behind you or keep the lights on throughout your house most of the time? Explain your answer.

My mother and most of her generation, was always saying “Don’t leave the lights on. You’ll burn up too much electricity.” or sometimes. “If you keep flicking that switch on and off it will explode!” I am mindful of not wasting power  so if I’m leaving a room for a long period of time I turn the light out. I pay the power bills now after all. I don’t turn it out for short visits to the bathroom etc though.

I don’t have good night vision though so once it gets dark I always leave the passage light on so I can find my way to the bathroom. If I’m on the computer at night and Hubby is in bed I’ll turn the main living room light off but might leave one on in the kitchen so I can see to get there. I leave a light on if I’m going out at night too. I don’t like to come home to a totally dark house.

I really prefer natural light during the day though. I don’t like having the curtains closed and the lights on in daytime. I know the sun fades the furniture etc but I just feel really uncomfortable in an artificially lit room during the day. When we lived in Adelaide we had to keep the curtains closed on hot summer days to try to keep the house cool and I hated it. As I’m writing this it’s morning but it’s raining heavily and outside it is as black as the ace of spades so I guess I’m going to have to turn a light on in this room. This old house has small windows and it can be pretty dark on a dull day.

What’s your favorite room in your home?

That’s a hard question to answer. I love my doll room because it’s my bit of space and I like to look at all my dolls. I like the spare bedroom because it is usually the tidiest room in the house, not so much now though because I am using it. I like sleeping there though. I can look at shelves of books, and the green glass ornaments and other knick knacks that would not be safe in any other room. Each room in our home has stuff that I like to look at so I have to say that I really like them all.

The lounge before I moved everything. I am a chronic furniture re-arranger.

The living room after a more recent furniture rearrangement. 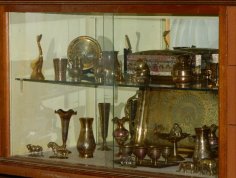 Favourite treasures in the living room.

My doll and craft space.

Sweet Dreams! Our old bed, repaired for the third time and recycled as a spare bed.

I love my hobby space in the doll room.

Bonus question: What are you grateful for from last week, and what are you looking forward to in the week coming up?

Last week I saw snow for the first time this year. I know for many of you reading who have had a long, hard winter that probably sounds bizarre but remember it doesn’t snow much in Australia, even in chilly Tasmania. We had strong winds and a lot of rain last week so I’m grateful that we did not lose power and we had snow down to 400 metres so when I went to Hobart I had a good view of it on the mountains. It rarely falls as sea level and never has in May all the time I’ve lived here. This week I’m hoping Hubby will finally get to the rehab ward after a two-week detour into cardiology, that means he will be on the final part of his recovery. On Sunday I’m going to lunch with friends I haven’t seen for six months so that will be nice too.