The National Sports Museum & The MCG

There are two sporting events that begin on December 26th. One of them is the Sydney Hobart yacht race which I will be posting about later in the week. The other is the Boxing Day Test Match held at the Melbourne Cricket Ground.

When I was in Melbourne in October my friends and  I went spent an afternoon doing the tour of the ground and visiting the National Sports Museum which is situated there.

The tour took us all around the public and not so public areas of the  building. Each group is led by a very knowledgeable guide who encouraged questions and ours was a mine of information about events that had been held at the MCG. For example the largest crowd ever at the ground was not for a sporting event but for a rally by evangelist Billy Graham in 1959. That event attracted more than 130,000 people and will never be surpassed due to modern OH&S regulations.

During the winter the MCG hosts AFL football and due to that they now use a drop in pitch for cricket. Our guide told us that the new wicket for the summer cricket season had just been relaid. “If you had been here last week all you would have seen is sand.” he said. If you are interested in how these are created you can read about it here

I’ve seen the MCG on television many times but it was quite amazing to be standing high in the grandstands looking down on the ground. I like Bellerive Oval in Hobart, it is the first place I went to watch cricket, it’s small and you feel very close to the action. I wasn’t sure if I would like to watch cricket in a big stadium although it would certainly be more comfortable. I was impressed though and when I sit down to watch the Boxing Day Test and see those stands packed with fans it will be easier for me to imagine what it would be like for the players to walk out there to the roar of the crowd.

I didn’t actually mind how high up we went in the stands but when my friend Bruce offered to take my picture standing by the railing I refused. I didn’t think I would feel comfortable standing with my back to the drop.

We were also taken to see the more private where players train, have meetings, physiotherapy etc. That was quite a fascinating part of the tour. I have always enjoyed “backstage” tours where you get to see how things are done.

The MCG has been the home of the Melbourne Cricket Club (established 1838) since 1853 when they relocated to the site from a nearby area. There is a lot of heritage and traditon associated with both the club and the cricket ground. We saw the Long Room, used by MCC members, the tapestry created for the 150th anniversary of the MCG and photographs and paintings of various sporting greats including one of Sachin Tendulkar with Don Bradman which the Indians on the tour rushed to be photographed with. The tapestry is an amazing piece of work detailing the chronological history of the ground.

At the end of our tour we went into the Sports Museum. By this time I realised that with the time we had available I would not be able to see everything so while Gillian and Bruce went to check out the Olympic and other sporting memorabilia I decided to concentrate on cricket.

There is a good collection of memorabilia, bats, uniforms and other items belonging to or associated with past players. Somewhere in the museum is a hologram of Shane Warne talking about cricket but I did not get to see this. I’m not a great fan of Warnie though so I was not particularly upset about that although I’d like to have seen a hologram. 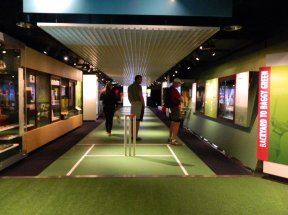 Inside the Sports Museum 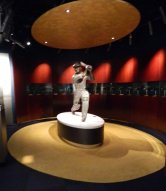 Don Bradman
This section of the museum houses the MCC Museum Collection and is curated by members of the MCC who volunteer their time. The collection included valuable artworks, silver and ceramics. One of the most valuable is the Baer Collection of fine porcelain. If you like decorative arts this is worth seeing even if you don’t like cricket. I was browsing in there when I got into conversation with one of the volunteers. We had a nice chat about the history of the Ashes and Rupertswood and he told me how the MCC Museum came to acquire the Baer Collection from England. He was a very nice man and I stayed talking to him until Gillian came to tell me that it was time to leave. Regrettably I had not seen half of what I wanted to see so a further trip to the Sports Museum is on my To Do list for a future trip to Melbourne.

On our way back to the station I stopped to photograph two of the statues on the Avenue of Legends outside.

If you are planning a visit to the MCG and plan to do both the tour and visit the Sports Museum I recommend allowing at least 4 hours. The tour takes about 75 minutes and does involve  a lot of walking. If you are like Gillian and myself and don’t care for escalators be aware that they are used to reach some levels. You can purchase a combined tour and museum ticket if you wish. We took a train from the Southern Cross Station to Jolimont and walked across the park. Another alternative would be the train to Richmond as it is not far from there either. There is also good access by tram and it’s really not that far to walk from the city either.
http://www.nsm.org.au/  – The National Sports Museum website has plenty of practical information for visitors.

http://www.mcg.org.au/ – The MCG website is also full of information about past and present activities, facts and figures.