Meanderings in the Midlands


I’m back from ten days visiting my sister in Oatlands and although I had a thoroughly good time I have to admit I missed my blog. I found trying to read posts over a very slow internet connection extremely trying so in between trying to read the few hundred emails that have probably accumulated in my Yahoo account I’ll try to catch up with what you have all been doing.

I didn’t take as many photos as I had hoped to on this trip. Our outings were based around visiting markets and interesting antique and second-hand shops so photos tended to be quick ones taken on the fly rather than planned. We had extraordinarily good weather, fine, mild and even warm days with light breezes and that made our outings very pleasant. I just love Tasmania in autumn. In South Australia the climate is warmer and drier and except in the hills you don’t really see deciduous trees as much as here. The changing colours and falling leaves remind me of my childhood in England.

The Midland Highway, the road that takes you from Hobart to Launceston, or from Launceston to Hobart if you are a northerner :), is promoted as the Heritage Highway. I’ve visited most of the towns on the route but apart from Oatlands itself the two I know best are Ross and Campbelltown. One day last week we decided to pay them both another visit.

Ross is off the highway,a quiet little village which started life as a garrison town as long ago as 1812 which is very early in Australia’s history. Ross has a convict designed and built stone bridge which is probably my favourite of Tasmania’s three well-known bridges, Richmond, Ross and Campbelltown. The main feature of the bridge are 186 carvings featuring insects, birds, animals and faces of local personages including an unflattering one of Governor Arthur! I was quite surprised to find that although this is my favourite bridge I didn’t have a recent photo of it in my files. I think I had mentally noted that I had “done” Ross bridge and didn’t need to take another but the photo above was taken on my first trip to Tasmania with Hubby around 1999! I guess I thought I would never take another as good.  For those who like details it was taken with my old Pentax MG, my favourite camera before I went digital. The picture at the beginning of this piece was taken by Hubby and is of me standing in the middle of the bridge by the engraving showing the distances to Hobart and Launceston. Sadly I’m fatter and greyer than that now.

On a fine day you can see visitors strolling up and down Ross High Street, getting lunch, browsing in the few shops or visiting the Wool Centre. There is a nice old pub called the Man’O’Ross, a bakery which is popular with visitors and antique and gift shops.  It was a bit early for lunch so we just had a look in the antique shops before heading off to Campbelltown.

Campbelltown is quite a different kind of town. The highway goes right through it so although it is equally old and has historic buildings it has a much busier feel to it. If you are driving off the ferry in Devonport and heading to Hobart you will probably find yourself stopping in Campbelltown for petrol, food or a chance to stretch your legs. There is a nice park next to the service station and several cafes. The service station once had a cafe attached where you could buy deep-fried Mars Bars but I think that is gone now. Campbelltown’s Red Bridge was also convict built. Nearby are a group of wooden sculptures which were carved from trees which once grew beside the river. One depicts the bridge and a soldier guarding a convict. This was the main north south route even in those early days and much of the road and bridge work was done by the convicts who also made the bricks for many buildings all over the state. 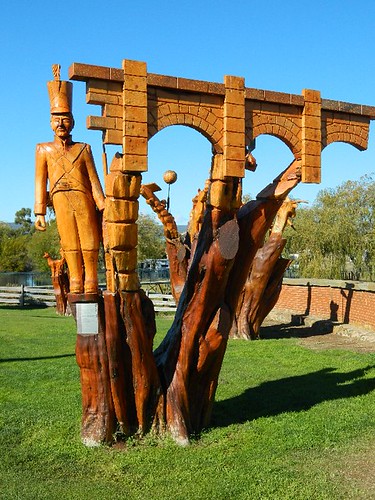 The next one has a lot going on. It shows Governor Macquarie and his wife Elizabeth (Campbell) and the bushranger Martin Cash. Seated with his telescope is Dr William Valentine. He was responsible for bringing a team from the US Naval Observatory to Campbelltown to view the Transit of Venus in 1874. The aeroplane and globe commemorate local aviator Howard Gatty who in 1931 circumnavigated the globe in a plane called “the Winnie Mae”. Lastly on this very busy sculpture there are bales of wool and sheep representing the Campbelltown Agricultural Show, the longest running show in Australia. The Midlands grew rich on the sheep’s back and many fine homes were built all over the countryside.

The last one depicts the animals ,birds and fish found in the area of the Elizabeth River. How do I know all this? I took a photo of the informative plaque on site. 🙂